The defence of democracy cannot be selective 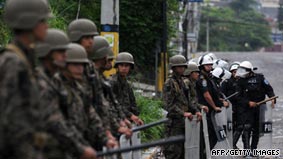 You don’t burst into a palace in a blaze of gunfire, rouse a pyjama-clad president from his bed, stick a gun to his head, force him onto a military plane and spirit him into exile in another country, and then call what you did “constitutional.”

Yet that is exactly what has happened in Honduras since Sunday. It is absolutely clear that the country’s constitutional and democratic order has been “interrupted,” to use the phraseology of the Inter-American Democratic Charter.

So it is a relief that the international community has responded with remarkable unanimity, at least so far. Instead of acting on the basis of whether the ousted leader is a “good man” or a “bad man,” as his predecessor would likely have done, U.S. President Barack Obama has allowed his administration to be guided by the Democratic Charter, a binding document on members of the Organization of American States. His instincts are multilateral.

OAS ambassadors assembled and immediately expressed vigorous condemnation of the coup d’état. They demanded Manuel Zelaya’s return and said no government arising from it will be recognized. Secretary-General Jose Miguel Insulza shuttled around Central America, building support for Honduras’s possible suspension. Leaders throughout the region have echoed his support for Mr. Zelaya. Canada’s Minister of State for the Americas, Peter Kent, condemned the coup, although he stopped short of calling for the President’s return. An OAS meeting scheduled for today will be decisive.

At stake is nothing less than whether Latin America will return to an era of coup-mongering. It is unlikely that Latin America will see a resurgence of the brutally repressive regimes of the past; what we are witnessing is a 21st-century version. In this model, the President has been removed to stop him from following a script written in Venezuela, Bolivia and Ecuador. Indeed, the coup’s entire plotline is redolent of the ouster of Venezuelan President Hugo Chavez in 2002, complete with a bogus letter of resignation.

What the coup leaders want to stop is a referendum to convene a constituent assembly. They fear the assembly would usurp their power, then institute reforms to sweep away traditional parties and politicians. These fears resonate in some quarters of the international community, causing some to privately doubt whether Mr. Zelaya is a worthy cause. Critics consider him a populist demagogue of the same ilk as Mr. Chavez, and believe an attempt to restore him to power plays into the hands of radicalism.

Such views are no basis for decision-making in a crisis like this. The international defence of democracy cannot be selective or based on ideology.

Another ostensibly legitimate but in fact misguided concern is that Mr. Zelaya had already acted unconstitutionally himself. By attempting to proceed with a non-binding consultation, he opened the door to his own removal. After all, how else can you stop a President bent on defying the will of the Honduran Congress and the explicit instructions of the country’s Supreme Court?

The real arbiters will be the Honduran people. No president can change a constitution by plebiscitary means without massive public support. A deep desire for participation has been the key to the political success of Mr. Chavez in Venezuela, Evo Morales in Bolivia and Rafael Correa in Ecuador. It is unclear whether Mr. Zelaya can elicit a similar level of public support – that will be key in coming days.

The international community will need to be creative and pragmatic, but it must be clear on one point of principle: With the removal of an elected President, the democratic order has been interrupted. Normal relations with the rest of the Western Hemisphere should likewise be suspended pending the restoration of Mr. Zelaya’s government.

One response to “The defence of democracy cannot be selective”