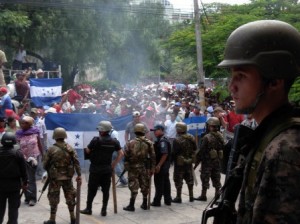 Published in The Mark

By Maxwell A. Cameron

Justifications for the removal of the Honduran president ignore one crucial fact: there’s no such thing as a constitutional coup.

What does matter is that nothing the president did justifies his removal by force without due process. It matters that Zelaya was sent into exile rather than arrested and brought before a judge, and that the de facto regime has not proven in a court of law that the president broke the law. (What is more, he did not break the law: at no time did Zelaya propose to change the re-election rule, nor could he have done so before leaving office.) And it matters that the actions of Micheletti and his cronies violated the letter and the spirit of the law and were also inconsistent with basic principles inherent in all constitutions.

You might say, “But the constitution has not been changed, it has been upheld.” Wrong! The Honduran constitution has been interrupted and altered. The current de facto regime holds power by virtue of non-electoral and non-constitutional means. And a new rule has been added to Honduran politics: don’t even think about constitutional change or you’ll be exiled or arrested.

This brings us to the challenge we now face. The Western Hemisphere must become a coup-free zone. Now you might say, don’t we already have an Inter-American Democratic Charter that is supposed to make the coup a thing of the past? Well, in fact, one of the biggest problems with the Charter is that it does not define or specify what counts as an “unconstitutional interruption or alteration of the constitutional democratic order.” Yes, the Charter describes democracy, and does so rather comprehensively. But it does not define the obverse: the features of a non-democratic regime.

What is a coup? I suggest a method for discerning coups, based on the theory that “if it waddles like a duck, flaps like a duck, and quacks like a duck, it probably is a duck.” Here are some of the quacks, flaps, and waddles that count as coups:
1 Arbitrary or illegal termination of the tenure in office of any democratically elected official by any other elected officials.
2 Arbitrary or illegal appointment, removal, or interference in the appointment or deliberations of members of the judiciary or electoral bodies.
3 Interference by non-elected officials, such as military officers, in the jurisdiction of elected officials.
4 Use of public office to silence, harass, or disrupt the normal and legal activities of members of the political opposition, the press, or civil society.
5 Failure to hold elections that meet generally accepted international standards of freedom and fairness.
6 Violation of the integrity of central institutions, including constitutional checks and balances providing for the separation of powers.
7 Failure to hold periodic elections or to respect electoral outcomes.
8 Systematic violation of basic freedoms, including freedom of expression, freedom of association, or respect for minority rights.

What about Zelaya? Did he not also act in defiance of both the judiciary and election authorities and, therefore, violate conditions 2 and 6? I’m not persuaded. Zelaya did not purge or stack the Supreme Court or electoral authorities; he did not close Congress; he did not suspend the constitution. Moreover, to remove Zelaya because he insisted on a non-binding consultation is like hitting a child for hitting another child. Imagine what would happen if we were to generalize this practice. Evo Morales could dismiss every prefect who held a referendum on autonomy in Bolivia.

Honduras’ de facto leaders have opened a Pandora’s box inside of which quivers every impulse to repress, censor, abuse power, and violate human rights. There is a danger that the events in Honduras may be repeated elsewhere, either in the immediate neighbourhood or in the Andes. But if they spark a move to clarify the meaning of a coup, and this is incorporated into the Democratic Charter, we could very well find that the threat to democracy is also an opportunity to improve the way we support it.

– This is a revised version of a talk presented at the Canadian Council for International Co-operation, Ottawa, October 7, 2009.