Update on the Honduran Crisis 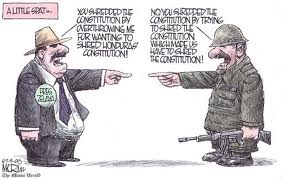 On the morning of Tuesday, September 22, 2009, masked Honduran security forces used tear gas and rubber bullets to disperse supporters of deposed President Manuel Zelaya that surrounded the Brazilian Embassy where Zelaya sought refuge upon returning to Honduras. Demonstrators outside the Embassy were defying a curfew imposed by the de facto government from 4:00 pm on Monday to 6:00 pm Tuesday. Up to 300 people were detained and many were reportedly being held at a stadium in Tegucigalpa. There were reports of people injured and 10 dead, while the government has so far only confirmed three deaths.

In an effort to avoid escalating violence, at an emergency Organization of American States (OAS), the Chair of the Permanent Council of the OAS called for “respect for Human Rights of all Honduran citizens, and for full guarantees for the security of the Honduran leader and the Diplomatic Representation of Brazil in Honduras.”

De facto leader Roberto Micheletti initially denied Zelaya’s presence in the country and subsequently denounced the claims as “media terrorism”. Once Zelaya’s return was confirmed, a surprised Micheletti demanded that Brazil hand over Zelaya so that he could stand trial, and warned that Brazil would be held responsible for any violence. Celso Amorim, Brazil’s Foreign Minister argued that threats made against Zelaya and the Brazilian Embassy would violate international law.

Three months after being ousted, Zelaya surreptitiously returned to Honduras on Monday, September 21. His return is viewed as irresponsible by some who see a risk of increasing violence in an already volatile political climate. Others welcomed the move as a bold step to regain momentum after talks to resolve the crisis had stalled.

While in office, President Zelaya had planned to hold a non-binding public consultation on 28 June to ask voters whether they supported changing the constitution.  This “consultation” would have involved adding a question to November’s presidential election ballots and would have opened the door to a process of rewriting the constitution. Zelaya’s critics claim this was his attempt to remove the one-term limit for presidents, as stated in the constitution, a charge Zelaya denies, pointing out it would be impossible for a constituent assembly to rewrite the constitution before the November elections, and that in January 2010, Honduras would have a new president.

Under Title VII of the Honduran constitution, the constitution may only be amended by the National Congress after a two-thirds vote in two consecutive annual sessions; however, certain provisions may not be amended, including the length of the term of office and prohibition on reelection.

Zelaya’s attempt to push forward the vote on June 28 was seen as unconstitutional by the Supreme Court. After he was deposed, the National Congress voted retroactively to remove Zelaya over “repeated violations of the constitution and law”.  Zelaya was taken at dawn from his house on the day of the vote and, in his own words, told to surrender or be shot.

The President was then put on a flight to Costa Rica, while Roberto Micheletti, the Speaker of Congress was sworn in as interim president. Zelaya has since spent most of his time in exile in neighboring Nicaragua a nation that, under the leadership of Daniel Ortega, has been supportive of Zelaya.

Tension in Honduras has been growing since Zelaya, of the Liberal Party, won the presidential elections in 2005 with a majority of 75,000 votes. A former businessman and seemingly sitting to the center-right, Zelaya began moving the country steadily to the left once in office, winning support from other left-wing leaders in Central and South America. In particular, as Zelaya became increasingly friendly with Venezuela’s Hugo Chavez and the nations that form part of the ALBA (the Bolivarian Alternative for the Americas), his relations with local elites and the media were strained.  Fears that Zelaya was bringing Honduras into the orbit of some of the more radical leftist leaders of the region appear to have been a prime motivation for the coup.

The issue of re-election was also a flash-point for conflict, particularly since many leaders in the region have used the strategy of constitutional reform to eliminate or relax term limits. Various countries of the region have overhauled their constitutions, perceiving those in effect to be, by regional standards, too liberal and exclusionary of marginalized social sectors. Argentina, Venezuela, Ecuador, Bolivia have, for example, all voted to amend their constitutions in recent years.

These moves are not limited to left-wing governments. Colombia’s 1991 constitution initially prohibited the immediate re-election of the president. In 2004, changes were made to the constitution to allow for re-election, giving Alvaro Uribe a second term in office. Additionally, while it still requires negotiation by the House of Representatives, and subsequent review by the Constitutional Court, the Colombian Senate in May 2009 passed a bill that would allow a referendum to decide whether the president could be elected for a third term.

While some of these constitutional reform processes ran more smoothly than others,  Zelaya’s support base was considerably smaller than the large grassroots support base seen in countries like Bolivia and Venezuela, which provides some insight into why a seemingly innocuous move by Zelaya was so controversial in Honduras.

However, since Zelaya’s removal, many on the Honduran left have rallied to support the elected president, including labour unions, students, and indigenous groups. Human rights groups in Honduras have made claims that the security forces have used excessive use of force in repelling mobilizations by these sectors.

With the failure of the San Jose Accord, the proposal to end the crisis put forward by Costa Rica’s Preseident Oscar Arias, a new round of negotiations seemed increasingly difficult. Zelaya’s return to Honduras could be read as a somewhat desperate attempt to restart these negotiations.

The clock is ticking.  For many countries in the hemisphere, recognizing the elections scheduled for November could legitimize the de facto regime and set a poor precedent for both Honduras and the broader region. OAS Secretary General José Miguel Insulza has stressed that he does not wish to return to an era in which caretaker coups were commonplace.

In a September 14, 2009 video-conference broadcast to various Canadian universities, Insulza spoke of his frustrations regarding the limitations on what the international community can do. Using one of the few tools for negotiation the OAS has at its disposal, Honduras’ membership has been temporarily suspended.  Another option would be to place an embargo on the country, which few would prefer due to both the large percentage of Honduran exports that travels to the rest of the region and out of consideration for the Honduran population that would likely be hit hardest by the effects of an embargo. The World Bank has suspended aid and the US government has revoked US visas to government officials, including that of Micheletti.

Insuzla argued that the Inter-American Democratic Charter needs to be reformed, pointing out that it does not clearly define an “alteration” or “interruption of democratic order”. He lamented the few provisions the OAS has for anticipating problems, and little or no tools at its disposal for reacting to crises. He urged the need for widening the spectre of authority: currently, the OAS Secretary General can only take complaints from heads of state, but not from Congress members.

When asked about the issues that are most problematic for reaching an agreement in the San Jose Accord, Insulza pointed to two main points causing the deadlock. The first is the current interim government’s refusal to reinstate Zelaya to serve his last three months as president. The second problem stems from the interim government’s refusal to grant Zelaya political amnesty because of their assumption that this would by default involve pardoning Zelaya’s criminal acts.

Insulza reiterated that the events in Honduras are unacceptable and stressed the need to respect both the principle of non-intervention and the defence of democracy at each step of the resolution process. Insulza is standing by to travel to Honduras as soon as the Tegucigalpa airport reopens.

It is difficult to prognosticate about what will happen next. Various news sources have speculated that Micheletti’s army might attempt to take over the Brazilian embassy. Brazil and the US are urging the United Nations to hold an emergency meeting over the standoff at the Embassy. Brazilian President Luiz Inacio “Lula” da Silva has demanded that Zelaya be reinstated and refuses to turn him over to the de facto government; meanwhile, Micheletti’s government refuses to reinstate Zelaya and urges Brazil to hand him over or grant him refugee status in Brazil. Zelaya seems willing to stand trial, but is determined to be reinstated.

In the meantime, Micheletti’s interim government has given the Brazilian Embassy a 10-day ultimatum to release Zelaya or grant him asylum in Brazil, and has also instated an emergency decree that suspend civil-liberties for a 45 day period, although Micheletti says they may be restored before then. Unauthorized public meetings have been banned and two media outlets, Radio Globo and Cholusat Sur TV, have been shut down. The US government has condemned the emergency decree, saying “The freedoms inherent in the suspended rights are inalienable and cannot be limited or restricted without seriously damaging the democratic aspirations of the Honduran people.”

The previous OAS consensus that Zelaya should be immediately reinstated seems to be breaking down. On Monday, September 28th, the US, Canada, Costa Rica, Bahamas and Peru were considering dropping Zelaya’s reinstatement as a precondition for having credible elections. Adolfo Facusse, a businessman who backs Micheletti suggested allowing Zelaya to have a symbolic return to power but do so under house arrest and face corruption charges.

If Zelaya is not returned to power and elections are held as planned, chances are that the international community may not see the elections as legitimate. UN Secretary General Ban Ki-moon does not believe the current situation is setting Honduras on the path towards “credible elections” set for November, and the UN has suspended electoral assistance.  The most significant effect of Zelaya’s return to Honduras may be that it has complicated the de facto regime’s strategy of hanging tough until the November election in the hope that the next government can mend fences with the international community.