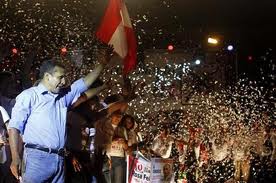 By Maxwell A. Cameron and Fabiola Bazo

This past Sunday, Peruvian voters selected Ollanta Humala (under the banner of Gana Perú) and Keiko Fujimori (Fuerza 2011) to enter a second round of voting, or ballotage. Voters chose between 10 candidates for the presidency, and from 13 congressional slates. Definitive parliamentary results will not be known for days (or weeks), but it appears that Gana Perú and Fuerza 2011 will obtain the largest number of seats in Congress, followed by Alejandro Toledo’s Perú Posible. The runoff will be held on Sunday, June 5.

Read more in The Mark