Minister of State Ablonczy Proposes Compendium of Practices of Democracy 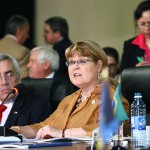 In a recent speech to the General Assembly of the Organization of American States, held in San Salvador, Minister of State Diane Ablonczy outlined a concrete and constructive proposal for reinforcing the Inter-American Democratic Charter. The key passages follow:

As we all know, peace and security are ultimately founded on respect for democratic principles and human rights. We have collectively enshrined these principles in the Inter-American Democratic Charter, a landmark achievement that will celebrate its 10th anniversary later this year.

The Inter-American Democratic Charter remains a fundamental point of reference that guides our collective efforts in strengthening democratic governance in the hemisphere. Canada is pleased that this year’s resolution on supporting the promotion of democracy in the hemisphere calls for dialogue to continue strengthening the implementation of the tenets of this key document, recognizing the important contributions that civil society organizations can make to this process.

While there is wide acceptance among our member states on the need for democracy as an expression of political will, Canada would like to see a focus in discussions going forward on the practice of democracy. By “practice of democracy,” I am referring to the day-to-day functions of our governments as well as the way in which our institutions interact with citizens.

For Canada, this includes elements such as the balance of power between public institutions, freedom of expression, a vibrant civil society, respect for minority rights and minority views, the existence of a free media and respect for a loyal political opposition.

You will understand that as a parliamentarian, I am very sensitive to the role of elected officials and of civil society in a healthy and vibrant democracy.

Canada believes that an open debate on the practice of democracy would be healthy for democracy in the Americas. As a starting point, we should share our experiences in the practice of democracy. Canada suggests that member states consider the creation of a compendium of good practices where we could review and exchange information on what each member considers its national contributions to democratic practices.

We believe that all countries in the hemisphere, including Canada, stand to benefit from a formal exchange and dialogue on best practices related to democratic governance. It is our hope that such a process would also lead toward strengthening the implementation of the Democratic Charter.

Despite advances in democracy over the past couple of decades, political crises still threaten stability in the region. The coup d’état in Honduras two years ago was not only a major step backward for Honduras, it also threatened the democratic gains we have collectively made in the region.

However, Honduras is well on the path to recovery, with a democratically elected government and a truth and reconciliation commission that has played a critical role in the process of national reconciliation. Despite the fact that President [Porfirio] Lobo has faced tremendous challenges as a result of the 2009 crisis, he has responded constructively to the concerns of both domestic and international actors.

Canada was therefore very pleased to welcome Honduras back to the OAS at the Special General Assembly held last week in Washington, D.C. The reintegration of Honduras into the OAS allows us to benefit from the important contribution that Honduras has to make to this organization and to focus on the other significant hemispheric challenges that warrant our full attention.