Debating the Democratic Charter on its 10th Anniversary 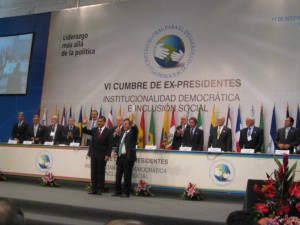 On September 11, 2011, Alejandro Toledo, the former president of Peru (2001-2006) held the “6th summit of ex-presidents” in Lima, which included Vicente Fox, Carlos Mesa, Nicolas Artido, Antonio Saca, Ernesto Samper, Fernando de la Rua, Hipolito Mejia, Martin Torrijos, Gustavo Noboa, Rodrigo Borja, Jaime Paz Zamora, Cesar Gaviria, Jose Aznar, and the Secretary General of the OAS, Jose Miguel Insulza. President Ollanta Humala opened the meeting and one of his first comments was about the need to democratize the summit with more ex-presidents. I think that may have been a subtle hint that the group needs to be a little more diverse. Lula sent a letter, but it would have been nice to have had Bachelet both for gender and ideological balance. Since Latin America has been swept by a red-tide, it is inevitable that a meeting of ex-presidents tends to tilt to the right. But then so did the audience.

Ollanta Humala gave a decent speech. He argued that democracy means that the voices of all must be channeled through the political process, without opinions being fragmented or excluded. He talked about how there are democratic deliberations in communities throughout the land, but whereas some groups have the power to translate their views into law, others can only influence politics through mobilization. I said Peru’s republic has always excluded the indigenous, the cholos, the slaves. Indeed, democracy did not come with the republic and independence. He also called for parties that are not identified with individual personalities and criticized the tendency to caudillismo in Peru, which I thought was rather interesting given his own personality-driven approach to politics. Finally, Humala spoke of the importance of creating a Peru in which people can live in communities where there is clean potable water, their kids can go to school, and people can enjoy a decent life.

From my perspective, the worst presentation by the ex-presidents was made by Aznar. He seemed to want to take Humala’s speech as somehow implying that all Peru needs is a more efficient state. There are no alternative models, only markets and democracy, and there cannot be two or more Latin Americas any more than there can be two Germanys.

Insulza argued for better monitoring of compliance with the Democratic Charter. Recognizing that states don’t like monitoring, he suggests that rather than a democracy rapporteur, there should be a peer review process. He argued for an increase in the capacity of the OAS to review situations in which democracy is at risk. Preventive action requires that the government in question requests OAS involvement. This hinders the capacity of the Secretary General. He said we should not reopen the democratic charter. Just look at ideological division of region, if you open the Charter it will all fall apart. But there is room for additional resolutions to strengthen it. We need, for example, a better definition to “serious ruptures.” These are not defined, but it is clear that in Quebec in 2001 the chiefs of state understood this to mean more than coups. It means intervention in other powers of the state – the dissolution of another branch – or massive fraud. Another example would be when states close all or most of the media. If these things are defined on a case-by-case they become politicized. Above all, unity of the region should be maintained.

Gaviria’s point was that the Democratic Charter has the same status as the OAS founding Charter. There are mechanisms to implement it. If countries don’t use them, that is because they don’t want to. If they want to act, they can; the Charter empowers them. That said, he felt that the power of the Secretary General should be reinforced.

Fox made a weird case for decriminalization of drugs. He said drugs should not be the last prohibition. We’ve legalized abortion, and gay marriage, but not drugs. Say, what?

Carlos Mesa noted that Latin America has a history of executives attacking legislatures and vice versa, but noted that it is hard for judges to destabilize democracy. Yet who defends the judiciary? If judges want an audience in OAS, the executive will be the first to block them.

Noboa harangued us about Correa concluded with the prediction that all forms of 21st Century Socialism are but steps toward totalitarianism. I was more impressed by Borja’s criticism of Correa: that he uses the rhetoric of socialism but has done little to implement socialist reforms. Instead, he has spent most of his time building up presidential powers.

My own intervention can be found in the previous post. Rather than reading the speech, however, I improvised a bit and threw in a few lines to pick up on previous interventions. In particular, I tried to reinforce Humala’s message about the importance of recognizing that there is no single model of democracy and that democracy means not just respecting a given democratic model but also the right to choose the form of government that the public wants. I suggested he did the right thing by swearing himself in on the 1979 rather than 1993 constitution, because it is valid to talk about the kind of constitution one wants. That was the point that generated the most controversy. That, and the suggestion the OAS should apologize to Chile for holding its General Assembly in Santiago in 1976 in the height of the military dictatorship. That is the other anniversary of this day: the coup in Chile was 38 years ago.

Sounds good. The challenge will be, as it is with the Charter itself, how to execute this mandate.