Skip to content
[X] close
» Home » News and Events » Between illusion and sense of mission: Chavez’ legacy viewed from Colombia

Between illusion and sense of mission: Chavez’ legacy viewed from Colombia 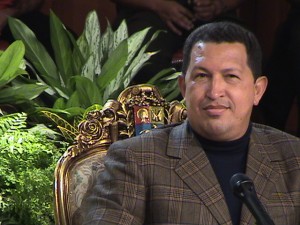 March 6, 2013
By Jan Boesten, PhD Candidate, Department of Political Science at the University of British Columbia.

Not long after the death of Venezuelan President Hugo Chavez was announced, several obituaries by international online news pages quoted Gabriel García Márquez’s words invigorating the ambiguous character of the self-declared Bolivarian revolutionary.  To the Nobel Laureate, it appeared like talking to two men: “One to whom inveterate luck has granted the chance to save his country. The other, an illusionist, who could go down in history as just another despot.” History will now tell, whether the achievements of uplifting millions of Venezuelans from poverty came at a too high cost for democracy in the Andean country.

Because Chavez developed a healthy sense of mission, which successfully radiated to other Andean countries in South America, Western countries predominantly viewed Chavez as a source of instability in the region. Here, too, history will now show whether this claim has any validity. The early demise of the Venezuelan leader is probably nowhere viewed with such anxiety as in neighboring Colombia. In the fall of 2012, news in Colombia reported on the status of the Venezuelan race that eventually gave the victory to Chavez before turning to the electoral fight between Barack Obama and Mitt Romney in the US. And indeed, Venezuela and Colombia’s relation is not only historically steeped, but was particularly delicate in the last decade. Yet, the reactions in Colombia are more subtle and balanced than one might expect in a country that was at the edge of war with the now deceased exactly five years ago. Reviewing these bilateral relations and the dominant sentiment in Colombia provides the opportunity to have more nuanced view on Chavez’s legacy.

The fragile relations between Venezuela and Colombia was focused on the very public fights between Chavez and his right-wing counterpart in Colombia, Álvaro Uribe, who was in power from 2002 until 2010. The two former President could not be more polar opposites: Chavez was born to a village teacher family Venezuelan state of Barina, while Uribe came from a rich and powerful land owning family in the Antioquia region; Chavez developed a ideology that mixed together brands of Catholic liberation theology, Gueveraian and Castroite Marxism, and Bolivarian nationalism, while Uribe placed traditional values rooted in peasant folklore and the focus on security on his banners. Yet, despite their difference, their taste for populism and political theatre to rally up support as well as a bipolar relation with democratic institutions united the two – if not in spirit, at least in posture.

Bipolar is also the best word to describe the relationship between the two: one day they would engage in friendly words, resulting in machismo competitions of manliness (who was better in riding a horse and drinking a cup of coffee at the same time. Uribe won) to a war of words, in which the accusations rifled at each other ranged from caudillo, to autocrat, paramilitary, to Nazi. The thorn in their association was Uribe’s friendly alliance with the US (particularly under George W. Bush) and Chavez’s anti-imperialist positions that he famously put on display at the United Nations in 2006 (saying it smelled like sulfur after George W. Bush – the devil in his words – spoke). The tension reached their climax in early 2008. Chavez had put a lot of political capital into enabling a humanitarian exchange between Colombia’s oldest guerrilla group, FARC, and the Colombian government. When the exchange failed in January 2008, both sides accused each other undermining the efforts, resulting into a furious spit of words. The cold war of words almost turned into a hot war after Colombia raided a FARC camp that was on Ecuadorian soil. Only after a few months did the heads cool down, but Chavez and Uribe would neither become friends nor partners and the bilateral relations between the neighboring nations remain tense until the end of the Uribe presidency. Later, the released prisoner, Clara Rojas, confirmed that Colombian helicopters in the region where the exchange was to take place undermined the prisoner exchange.

On a more general level, Marquez’s words describe well the sentiments Colombian’s have towards the charismatic leader in Caracas; suspicion towards the amassment of power and authority in the already powerful presidency, but respect and even admiration for trying to fundamentally change the rampant inequality and confront the oligarchical power of the elite – both issues that Colombians confront themselves and that undermined the quality of their own democracy. A taxi driver in Bogota – always the best people to ask to capture a general political sentiment – summarized the admiration for Chavez and why his policies hit home with many Colombian: “in Venezuela they have change without deaths, here we have no change with many deaths” – a reference to the violence inflicted by paramilitary groups to protect Colombia from the guerrilla curse that more often than not victimizes peasants, journalists, union leaders, and legitimate (left-wing) politicians.

Notwithstanding the accusation that Chavez was uncomfortably close to the FARC in Colombia – a point that most often came from the Uribe camp with obvious political intention – Colombians also worried about the Bolivarian revolution in Venezuela. Even though Colombians are very much aware of the unreasonableness of a political and economic elite, they are equally concerned when a people’s tribune amasses too much power at the cost of the democratic system. Colombian democracy itself was rescued by its high courts from an overpowering executive (Uribe) that tried to cement its rule by repeated re-election and a compliant and co-opted Congress. Not surprisingly, Colombians across the board view and viewed Chavez’s repeated changes to the Venezuelan Constitution very critically. Related to that and also close to home, the packing of the highest Courts in Venezuela, which effectively paved the way for allowing constitutional change (and thus Chavez’s re-election), leaves a very negative mark with Colombian – after all, Uribe also tried to, but did not succeed, pack the Courts to have the referendum for constitutional change pass that would allow his re-election

The departure of Uribe from power in Colombia allowed for a rapprochement between the new President in Colombia, Juan Manuel Santos, and Chavez. It placed the bilateral on a much more pragmatic level, which had great benefits for Colombia: several high-ranking narco-traffickers were caught in Venezuela due to the better co-operation between Colombian and Venezuelan police – among them the last big capo of the Cartel epoch Cáyo “El Loco” Barrera. In addition, the ideological closeness between Chavez and Colombia’s long-living guerrilla could be utilized to bring the Colombian government and the FARC together for peace talks. Not surprisingly, Santos praised Chavez in his reaction for enabling the peace talks currently under way in Havana, Cuba.

With Chavez now gone, worries are great for what it means for stability in the neighboring country and how this might affect the situation in Colombia. Evidently, no one commands the masses the way Chávez did – least his heir apparent Nicolás Maduro – resulting in worries of whether Maduro will actually follow through with new Presidential elections. In short, Colombians are worried, whether the autocratic traits of Chavismo – centralization of power and populism – come to dominate or whether its inclusionary and democratic achievements undermine a regression to authoritarianism. Not having lost sight of both sides of the medal, the discussion in Colombia is much more balanced. While people in North America and Europe are caught in simplistic categories of good and bad left, which evidently echo Cold War categories, Colombians and probably most Latin Americans have a more nuanced view on the legacy of Chavez- understanding the new chance without loosing sight of the implicit dangers.