Skip to content
[X] close
» Home » News and Events » The Aftermath of Bagua: Lessons for Democracy in Peru

The Aftermath of Bagua: Lessons for Democracy in Peru 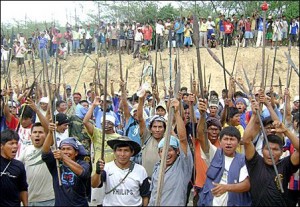 On June 5, 2009, in the Bagua Province of the Peruvian Amazon, dozens of people were killed and more than 200 were injured when national police attacked indigenous protesters that had mobilized against a series of legislative decrees. When word of the attack reached nearby communities, groups of indigenous and mestizo people retaliated against police installations, and the death toll surged. The official count of those killed is 23 police officers, 5 indigenous people, and 5 local mestizos. Indigenous groups contest these figures and claim that around 40 Awajún and Wampi indigenous peoples died, alleging that bodies were dumped in nearby rivers, although no evidence has been produced to confirm these reports.

The decree laws – issued by President Alan García in 2008 under special powers granted by the legislature (Law #29157) to facilitate the implementation of a free trade agreement with the U.S. – would open broad areas of the Amazon to mineral, oil, logging and agricultural exploitation. For example, one decree withdrew the requirement (not always enforced) that resource extraction firms acquire informed consent from local communities prior to entering their lands. García’s decrees were issued without consulting indigenous communities that stood to have their lives and territory affected, and with minimal transparency. The following accounting of what took place on June 5 highlights several deficiencies in Peruvian democracy: (a) citizens’ most basic rights are periodically violated in the enactment of the state’s coercive powers, (b) there remains a high level of political and social exclusion of marginalized groups, especially rural and indigenous peoples, and (c) presidents have a tendency to concentrate power – through rule by decree and issuance of states of exception.

The series of confrontations occurred when the head of special operations (DIROES), General Luis Muguruza, led security forces in an assault to dislodge a blockade established by thousands of indigenous protesters on a stretch of the Fernando Belaúnde Terry Highway known as the “Devil’s Curve.” The blockade had been part of a series of non-violent protests by indigenous groups over the course of eight weeks, which had involved the closure of road travel, river navigation and oil facilities. Although those opposed to what they called the “Laws of the Jungle” had pursued negotiations over the decrees for more than a year, the García Administration declined to consult with local communities prior to their passage. [1]  Instead of dialogue, García opted for confrontation, issuing a state of emergency on May 9, 2009, which suspended various constitutional protections, including the freedom of assembly and movement.

Those amassed at Devil’s Curve had hoped that a truce negotiated with the police the night before would allay a confrontation. However, at approximately 6:00 am, a verbal exchange between the police and protesters intensified, and without warning the police began shooting teargas and live ammunition indiscriminately into the blockade. The protesters responded by hurling rocks and spears, and police helicopters appeared overhead, also firing bullets into the crowd. Numerous deaths and injuries occurred on both sides.

News traveled rapidly, spurring two subsequent incidents. One took place in the nearby town of Bagua, where the situation turned riotous. A crowd of protesters engulfed the police station until police snipers opened fire from the rooftop, killing several of those below, including one indigenous leader, Felipe Sabio César of the Wawas community. The other site of violence – for some Peruvians, a more shocking one – occurred at a nearby pumping station 6, part of the North Peruvian Oil Pipeline, where 10 police officers were killed.

Weeks earlier, thirty-eight poorly equipped police had been sent to guard the pumping station. They entered into a non-aggression agreement with the community, and according to one officer developed a sort of camaraderie, with food shared and games of table football. The police were not informed in advance that the highway assault was to occur. That news arrived first to the indigenous people present via radio, who, outraged by reports of their comrades’ deaths, surrounded the police. Outnumbered and still unaware of what had taken place, the police surrendered their weapons, and were tied up and taken “hostage,” according to Garcia’s Prime Minister Yehude Simon, who described the situation in a press conference that evening. During the subsequent attempted rescue, ten of the police were killed in what some reports describe as “executions”. [2]

The decision to attack the highway blockaders occurred with no apparent concern for the police at pumping station 6, nor a plan for their safe withdrawal, despite intelligence reports that informed the administration of the situation there. Common sense suggests that retaliation against state actors and facilities was a possible response to the assault, and that the police at the pumping station were likely targets. The omission has spurred allegations of criminal negligence, incompetence, and disregard of intelligence on the part of Interior Minister Mercedes Cabanillas and national police generals that planned the strike on the highway.

As noted above, the death toll remains contested. An investigation by Peru’s Defensor del Pueblo (Ombudsman) found that police constituted the majority of those killed (23 of the 33 identified bodies),  [3] and these numbers have been accepted as the government’s official accounting of lives lost. However, several witnesses have charged that the police disposed of bodies in the Marañon River, and many indigenous people that had joined the protests have not yet been accounted for or returned to their communities.

A statement issued by the Organizing Committee for the Indigenous Peoples of Alto Amazonas Province declared: “It is appalling that political powers have acted in such a cruel and inhuman manner against Amazonian peoples, failing to recognize the fundamental rights and protections guaranteed to us by the Constitution.”  [4] Peru’s National Coordinator of Human Rights similarly laid blame at the feet of the state, alleging “negligence and the bad political decisions of the Government and the Congress have contributed in a fundamental way.”  [5]

With clear allusions to Sendero Luminoso (Shining Path), President García defended the police action as necessary to confront “subversive anti-democratic aggression,” while condemning the indigenous response as “savage and barbaric.” In an earlier racially-tinged declaration, García had declared, “Enough is enough. These peoples are not monarchy, they are not first-class citizens. Who are 400,000 natives to tell 28 million Peruvians that you have no right to come here? This is a grave error, and whoever thinks this way wants to lead us to irrationality and a retrograde primitivism” [emphasis added]. The pronouncements imply the view that indigenous people are less worthy of full enjoyment of their constitutional rights. Moreover, the president asserted that the land in question does not belong to indigenous communities, but to the state, and that the decreed laws are necessary to develop the country for all Peruvians. In addition to inflaming opposition, García’s discourse risks reproducing discriminatory stereotypes of indigenous peoples, deepening social cleavages, and reinforcing existing ethnic inequalities.

In the immediate aftermath of Bagua, a Peruvian judge issued an arrest warrant for Alberto Pizango, president of the Inter-ethnic Association for the Development of the Peruvian Amazon (AIDESEP), on charges of inciting the violence. Peru’s national indigenous organization, AIDESEP represents 1,350 indigenous communities that together comprise 350,000 people. Pizango, who blamed President García for what he describes as “genocide,” fled to Nicaragua, where he has been granted political asylum.

The fallout from the day of violence has been unfavorable for the government of García, who was forced to admit that “there were a series of errors and exaggerations” in the government’s actions on June 5. Prime Minister Simon asked the Congress to repeal two of the ten laws that spurred the protests – Decrees 1090 and 1064, which would have accelerated development of the agricultural and forestry sectors in Peru’s Amazon. The Congress overwhelmingly rescinded the two laws on June 18, while García’s other decrees remain in force. Simon subsequently resigned from his post. In early August 2009, public prosecutor Luz Rojas brought charges of homicide against two police generals, including General Muguruza, and 15 officers; however, it remains uncertain whether the case will move forward. [6]

Beyond the sheer loss of life, what transpired at Devil’s Curve throws a spotlight on several shortcomings of Peruvian democracy. On display in the bloodshed of June 5 was police use of excessive force, concentration of power in the executive branch, lack of transparency and consultation, and the state’s disregard for human life, of not just those that challenge it, but its own agents of coercion. A more fundamental problem that underpins the unfortunate chain of events is the political and social exclusion suffered by indigenous peoples in Peru. Although Bagua represents an extreme case of Peru’s failure to ensure constitutionally protected rights, democracy will remain shallow unless the country develops policies and practices that ensure this segment of the population achieves “first-class citizen” status.

2 responses to “The Aftermath of Bagua: Lessons for Democracy in Peru”