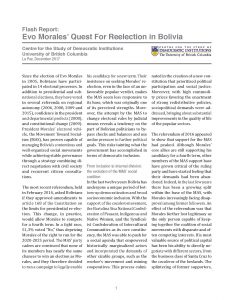 Since the election of Evo Morales in 2005, Bolivians have participated in 14 electoral processes. In addition to presidential and subnational elections, they have voted in several referenda on regional autonomy (2006, 2008, 2009 and 2015), confidence in the president and departmental prefects (2008), and constitutional change (2009). President Morales’ electoral vehicle, the Movement Toward Socialism (MAS), has proven capable of managing Bolivia’s contentious and well-organized social movements while achieving stable governance through a strategy combining direct negotiation with civil society and recurrent citizen consultations.

The most recent referendum, held in February 2016, asked Bolivians if they approved amendments to article 168 of the Constitution on the limits for presidential re-election. Read more.