Ecuador Struggles with Rafael Correa’s Legacy: The 2018 Referendum and Aftermath 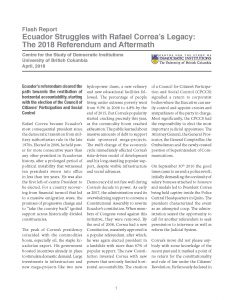 Ecuador’s referendum cleared the path towards the restitution of horizontal accountability, starting with the election of the Council of Citizens’ Participation and Social Control.

Rafael Correa became Ecuador’s most consequential president since the democratic transition from military authoritarian rule in the late 1970s. Elected in 2006, he held power for more consecutive years than any other president in Ecuadorian history, after a prolonged period of political instability that witnessed ten presidents sworn into office in less than ten years. He was also the first left-of-centre President to be elected. For a country recovering from financial turmoil that led to a massive emigration wave, the promises of progressive change and to “take the country back” ignited support across historically divided constituencies. Read more.